This past September I was once again invited to go to the Rubicon Trail and be there with the man himself, Marlin Czajkowski. Marlin is a good friend of mine. I've spent a lot of time with Marlin on trails here in the States, at his shop and in Australia. His knowledge of Toyota products is second to none and his memory of people and events is even better. Every time I go out with Marlin it's an adventure.

This time though it was different. This time I was taking my wife along and we would be doing the entire trail with marlins son, and president of Marlin Crawler, Inc. Big Mike.

Everyone says that Big Mike is just like his dad. Sure, they have some of the same mannerisms and Mike can have that same off beat kind of humor that makes Marlin so special. However, to say that Big Mike is just like his father wouldn't be fair to him. No, Big Mike is his own man with a certain direction and confidence that can only come from life experiences. Sure he's young and hasn't been walking around this earth as long as some of us has but he is smart and mature well beyond his years.

That knowledge and confidence would be put to the test as he led us and two of the biggest Tacoma's he's wheeled with, through the Rubicon.

After driving for a day and spending the night at Marlin and Christine Czajkowski's house in Fresno, California we headed off to meet Mike and a couple of his employees that would be driving up there with us. We would also meet with Ray Taylor, a good friend of mine and owner of one of the Baddest Taco's around.

From Fresno, we drove up to the Loone Lake side of the Rubicon Trail to unload our Tacoma's and get ready for our journey. Once unloaded we headed for the sign welcoming us to the start of the trail.

Our first day on the trail was a short one. We had no sooner gotten to the gate keeper when we happened upon a Jeep Rubicon that was turtled on a couple of boulders. It was getting dark and they were cold so we quickly got them off of the rocks. I hooked up my winch to them and using both the winch and the power of the Beast we pulled them off.

Once the Jeep was free we were headed off again to find our first nights camping spot.

Just as the sun was setting we found our camp spot for the night and was greeted with the most vibrant sunset I've seen in years.

The next morning it was time to see where we were going next.

Right after breaking camp it was time to stretch the legs on these big Taco's. And I mean big. The smallest tired Tacoma on this run was running 40" tires while the Beast was sporting 42's and Ray would carry the middle ground with 41's.

But that wasn't the big deal for us. The camera man was running a 4th gen 4Runner

, IFS on 35's. Now that was a sight to watch as he did not shy away from any of the hard spots.

The scenery was just epic as we started down into our next nights camp site.

The next days challenge....Soup Bowl. I tried the traditional line but got hung up so instead I went to the far left and straight up. Big Mike said he's never seen anyone take that line before. I'm sure there have been some as they were marks there from others attempts.

Ray took the traditional line and walked right up.

Nathan had a lot of fun doing wheel stands the entire time out there. He always had a tire in the air. Some times he had all four in the air. LOL.

I told you he didn't shy away from the hard lines.

The Beast flexing its way over an earlier obstacle. I just had a blast out there.

Then we came to a spot near Buck Island where folks were parked along side the hard line egging people to take it. Of course I couldn't pass up a hard line.

Of course, Nathan, not being one to shy away from an obstacle, tried it as well. But putting yourself between a rock and a hard place can only mean one thing....broken parts. He broke his passenger side tie rod as you can tell from the picture below but fortunately he had spares and we were quickly on our way again.

As we went further we came upon a spot that a boulder had been pulled down into the middle of the trail. Big Mike couldn't make it over or around it so I went ahead so that we could winch it out of the way. My 10,000 winch couldn't move it at all so we enlisted the help of this Marlin crawler equipped Chevy blazer and used both of our winches to move that rock. That Blazer made the Beast look like a prerunner.

After we got the boulder cleared and everyone through we headed for Rubicon Springs.

We had a blast coming down into the springs and meeting new people and seeing old friends.

Listening to Steve Morris was a blessing. Learning about the Rubicon trail from someone who had been there from the beginning was a true gold mine.

At the Springs we had a great time with the dinner provided by Marlin Crawler and saw a few cool vehicles while there as well.

Here is a video put together by Nathan from the Gear Shop. Thanks again. Wyatt 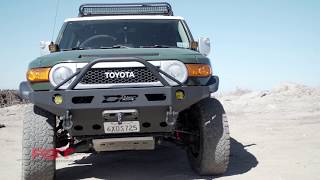